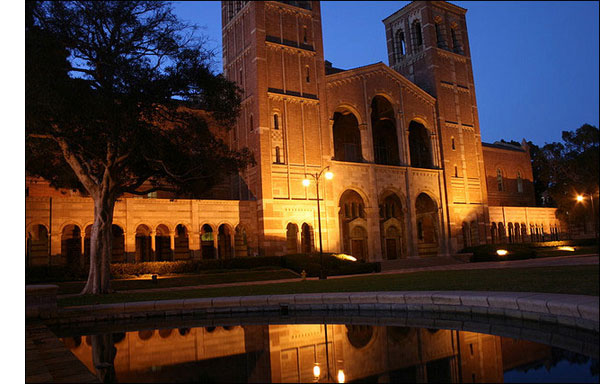 A symbol of both intellectual and artistic excellence, Royce Hall functions not only as a monument to Los Angeles’ rich cultural past, but also as a portal to the future.

The extraordinary history of performing arts presentation in Royce Hall is rooted in the late 1930s, when George Gershwin, Duke Ellington, Arnold Schoenberg and Jimmy Dorsey’s Band all performed in Royce Hall. Since then, the list of illustrious artists who have graced Royce Hall’s stage reads like a Who’s Who of performing arts in the 20th and 21st centuries, including Frank Sinatra, Ella Fitzgerald, Leonard Bernstein and the New York Philharmonic, Twyla Tharp, Frank Zappa, Mikhail Baryshnikov, The Philip Glass Ensemble and Meredith Monk to name a few.

Modeled after Milan’s Basilica di Sant’Ambrogio, constructed in the tenth and eleventh centuries, Royce Hall was built in 1929 as one of the first campus structures by architect David Allison.

Royce Hall’s reputation was forged early in the campus’ history. By 1936, the campus had been open for only seven years and was cradled in the midst of an old sheep pasture in an area that most residents probably still regarded as “country.” This would then seem like an unlikely place to stumble across one of the greatest American popular composers of all time – George Gershwin, who appeared at Royce Hall on September 28 of that year. 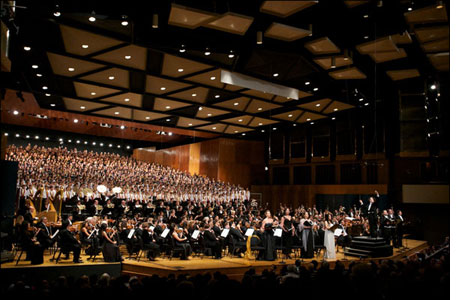 Far from being the first time that prominent figures appeared at Royce Hall (the list of early speakers includes Albert Einstein, who addressed the student body in 1932), the appearance of such famed artists symbolized the direction that Royce Hall’s programming would take, evolving from college auditorium to world-class venue.

Like Carnegie Hall and Lincoln Center, Royce Hall is one of America’s great concert halls, distinguished not only for its impeccable beauty and refined acoustics, but also for the ghosts of performances that haunt it.